Why the name, Cadence?

Cadence has several meanings.  The obvious running connotation has to do with the rhythm, or beat, of your footfalls.  To increase your running cadence means you are increasing the turnover of your feet or how many times your foot touches the ground in a given amount of time.  For example, the ideal running cadence is said to be between 180-210 per minute, meaning if you count, one foot touches the ground approximately 90 times in one minute.

For Dan, who served in the United States Army, cadence has a tone of togetherness.  To march in formation, as a group, is to march ‘in cadence’.  When deciding on a name, we liked the idea that as runners, we are in this together.  We all share the same love of the sport and when we race, we are out there, together, pursuing our passion.

Dan Beaver
Dan is busy running the shop!  We caught up with him briefly to ask about Cadence Running Company and here’s what we learned.  Dan has been involved in the running shoe industry for over two decades.  He has found it rewarding over the years to help people find the appropriate shoe for their needs, overcome injury, and run healthy.  Frankly, he just loves to run and hopes to share that passion with others. Dan’s belief, which is the principle that Cadence Running Company is founded on, is that we should take the time to establish a relationship with clients, not just sell shoes to people who want to run.  By understanding your history, your injuries, your goals and by analyzing your gait, we can help maximize your running experience.  We want to fit you with the appropriate shoe for you.  Dan loves to tell people, “We’re not going to sell you a shoe based on color!”  Once you have the right shoe, we want to work with you to make sure you are running with proper technique and form to minimize risk of injury.  He believes that with hard work, any goal is within reach.  On any given day you can find him talking about training and racing with anyone who has questions.  He’s happy to help. 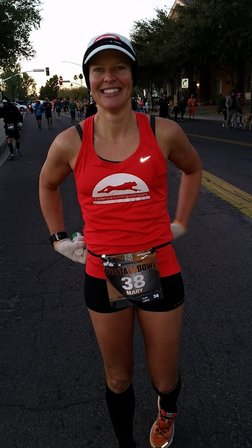 Mary Knott
Mary has been running since 2000.  What started out as a way to lose a few extra pounds, turned into a daily fix.  She met Dan while training for the Chicago Marathon in 2004.  Shortly after meeting, they relocated to Gilbert, Arizona where they found the running and triathlon community to be thriving.  Mary is a gear-junkie and you can trust that she’s tested out every product in the store.  Her passion is trail running, though in any given year she races everything from 5k’s, to marathons, trail races and Ironman triathlons.  She is happy to talk training, recovery techniques, nutrition, and injury prevention.

Trevor Davenport
Trevor started running recreationally back in 2005 and somehow got talked into running the Portland Marathon in 2007. Shortly after this race, he was sidelined by a severe case of plantar fasciitis and was forced to find alternative activities to stay fit. As part of the healing process, running was soon replaced by swimming and cycling…and well, you can guess what happened next! One thing led to another and he found himself training (and finishing) the 2009 Ironman Boise 70.3. Four other 70.3 finishes would follow and ultimately culminate with an Ironman Arizona finish in 2010.

Seeking softer trails and the title of ‘ultra-marathoner’, Trevor set out to conquer the San Tan Scramble 50k back in 2011. And he’s never looked back.

Since crossing over into ultra-marathons, Trevor has finished every distance between 50k and 100 miles. His finishes include the Black Hills 100, Mogollon Monster 100 and Leanhorse 100. Cadence is proud to sponsor Trevor each year for the Hom 100 – a charity run he organizes and runs in memory of his friend Tony Hom, who passed away in 2013 from ALS.

Trails remain his first love and he’ll jump at any chance to run single-track trails before pounding the pavement. You’ll find Trevor out at San Tan park at least 3-4 days during the week and leading the Cadence group trail run on Saturday mornings.

Karen McGrath
Karen discovered running in 2009 when she ran the Nike Women’s Marathon with Team in Training. Her running addiction eventually grew into triathlon and she has completed all distances up to a half iron man, someday hoping to complete a full ironman.

She has a two daughters and an amazing supportive husband. Their family is always on the go but she’s very proud that both her girls enjoy running and have even completed a few 5ks.

Karen feels lucky to have met Dan through the Team in Training experience and has enjoyed learning about all things running and triathlon related from Dan’s wealth of knowledge about the sports. Now she can’t wait to spread the gospel of Dan and get more people excited to be properly fit and injury free! 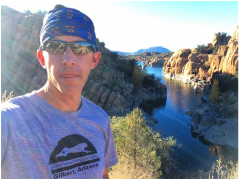 TIm Focht
Tim grew up in rural Pennsylvania and lived in Florida where cycling was his main interest.  After college in Indiana, he bought his first mountain bike and was in love with trail riding.  When the winter came he decided to start running on an indoor track to stay in shape.  As he ran on the track, he watched the people below swimming in the pool and thought, 'if I add swimming, I can start racing triathlon'.  He has competed in sprint triathlons, and 5k, 10k, 13.1, & marathon distances.  Tim moved to Arizona in 2003 and has mostly run trail and road races.  He loves running the trails at San Tan Regional Park, and has his mind on the Ultra distance.  He is doing a lot of aerobic HR training lately to build his endurance so that he's ready to tackle an ultra in the near future! 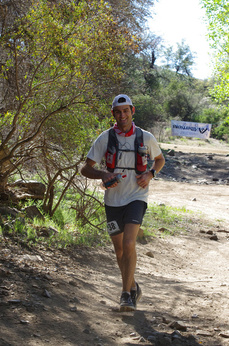 Clint Barrett
Clint loves to run.  He started running when he joined the Army in 2000.  What began as a way to maintain a required level of fitness soon became a preferred pastime.  After moving to Phoenix in 2004, he started exploring the deserts, mountains, canyons and forests of Arizona.  He will run the road if he has to, but his passion is for the trail.  Clint considers South Mountain his home turf and can be found there several days a week.  As a way to explore new trails, he signs up for races all over the state.  His favorite race is the 50 mile distance.  But he also enjoys the experience of 100 miles.  Distance isn’t all that matters.  For Clint it’s all about getting outside.  You can meet Clint in the shop as well as at our group run on Tuesday!